Railo is an open-source alternative to the popular Coldfusion application server, implementing a FOSSy CFML engine and application server. It emulates Coldfusion in a variety of ways, mainly features coming straight from the CF world, along with several of it’s own unique features (clustered servers, a plugin architecture, etc). In this four-part series, we’ll touch on how Railo, much like Coldfusion, can be used to gain access to a system or network of systems. I will also be examining several pre-authentication RCE vulnerabilities discovered in the platform during this audit. I’ll be pimping clusterd throughout to exemplify how it can help achieve some of these goals. These posts are the result of a combined effort between myself and Stephen Breen (@breenmachine).

I’ll preface this post with a quick rundown on what we’re working with; public versions of Railo run from versions 3.0 to 4.2, with 4.2.1 being the latest release as of posting. The code is also freely available on Github; much of this post’s code samples have been taken from the 4.2 branch or the master. Hashes:

And a quick rundown of the code:

Railo has two separate administrative web interfaces; server and web. The two interfaces segregate functionality out into these categories; managing the actual server and managing the content served up by the server. Server is available at http://localhost:8888/railo-context/admin/server.cfm and web is available at http://localhost:8888/railo-context/admin/web.cfm. Both interfaces are configured with a single, shared password that is set AFTER the site has been initialized. That is, the first person to hit the web server gets to choose the password.

As stated, authentication requires only a single password, but locks an IP address out if too many failed attempts are performed. The exact logic for this is as follows (web.cfm):

A Remember Me For setting allows an authenticated session to last until logout or for a specified amount of time. In the event that a cookie is saved for X amount of time, Railo actually encrypts the user’s password and stores it as the authentication cookie. Here’s the implementation of this:

That’s right; a static key, defined as <cfset cookieKey="sdfsdf789sdfsd">, is used as the key to the CFMX_COMPAT encryption algorithm for encrypting and storing the user’s password client-side. This is akin to simply base64’ing the password, as symmetric key security is dependant upon the secrecy of this shared key.

To then verify authentication, the cookie is decrypted and compared to the current password (which is also known; more on this later):

For example, if my stored cookie was RAILO_ADMIN_PW_WEB=6802AABFAA87A7, we could decrypt this with a simple CFML page:

This would dump my plaintext password (which, in this case, is “default”). This ups the ante with XSS, as we can essentially steal plaintext credentials via this vector. Our cookie is graciously set without HTTPOnly or Secure: Set-Cookie: RAILO_ADMIN_PW_WEB=6802AABFAA87A7;Path=/;Expires=Sun, 08-Mar-2015 06:42:31 GMT._

Another worthy mention is the fact that the plaintext password is stored in the session struct, as shown below:

In order to dump this, however, we’d need to be able to write a CFM file (or code) within the context of web.cfm. As a test, I’ve placed a short CFM file on the host and set the error handler to invoke it. test.cfm:

We then set the template handler to this file:

If we now hit a non-existent page, /railo-context/xx.cfm for example, we’ll trigger the cfm and get our plaintext password: 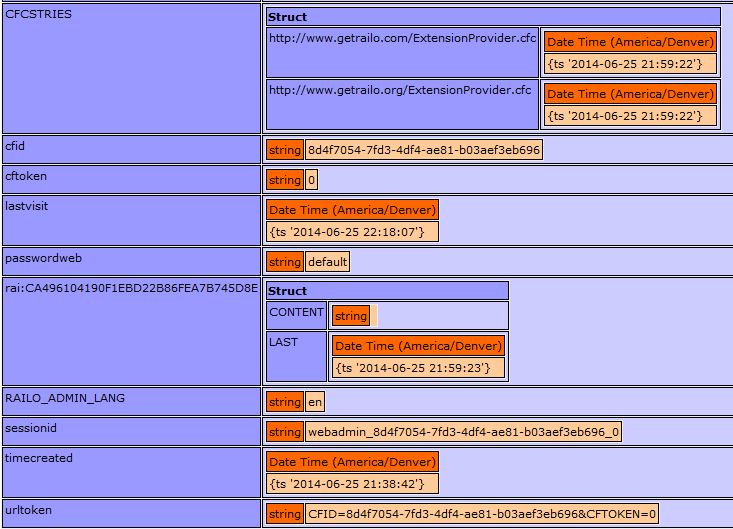 XSS is now awesome, because we can fetch the server’s plaintext password. Is there XSS in Railo?

Submitting to a CFM with malicious arguments triggers an error and injects unsanitized input.

Submitting malicious input into the search bar will effectively sanitize out greater than/less than signs, but not inside of the saved form. Injecting "></form><img src=x onerror=alert(document.cookie)> will, of course, pop-up the cookie.

How about stored XSS?

A malicious mapping will trigger whenever the page is loaded; the only caveat being that the path must start with a /, and you cannot use the script tag. Trivial to get around with any number of different tags.

Speaking of, let’s take a quick look at the sanitization routines. They’ve implemented their own routines inside of ScriptProtect.java, and it’s a very simple blacklist:

They iterate over these values and perform a simple compare, and if a bad tag is found, they simply replace it:

It doesn’t take much to evade this filter, as I’ve already described.

CSRF kinda fits in here, how about CSRF? Fortunately for users, and unfortunately for pentesters, there’s not much we can do. Although Railo does not enforce authentication for CFML/CFC pages, it does check read/write permissions on all accesses to the backend config file. This is configured in the Server interface:

In the above image, if Access Write was configured to open, any user could submit modifications to the back-end configuration, including password resets, task scheduling, and more. Though this is sufficiently locked down by default, this could provide a nice backdoor.

Much like Coldfusion, Railo features a task scheduler that can be used to deploy shells. A run of this in clusterd can be seen below:

This works almost identically to the Coldfusion scheduler, and should not be surprising.

One feature Railo has that isn’t found in Coldfusion is the Extension or Plugin architecture; this allows custom extensions to run in the context of the Railo server and execute code and tags. These extensions do not have access to the cfadmin tag (without authentication, that is), but we really don’t need that for a simple web shell. In the event that the Railo server is configured to not allow outbound traffic (hence rendering the Task Scheduler useless), this could be harnessed instead.

Railo allows extensions to be uploaded directly to the server, found here:

Developing a plugin is sort of confusing and not exacty clear via their provided Github documentation, however the simplest way to do this is grab a pre-existing package and simply replace one of the functions with a shell.

That about wraps up part one of our dive into Railo security; the remaining three parts will focus on several different vulnerabilities in the Railo framework, and how they can be lassoed together for pre-authentication RCE.